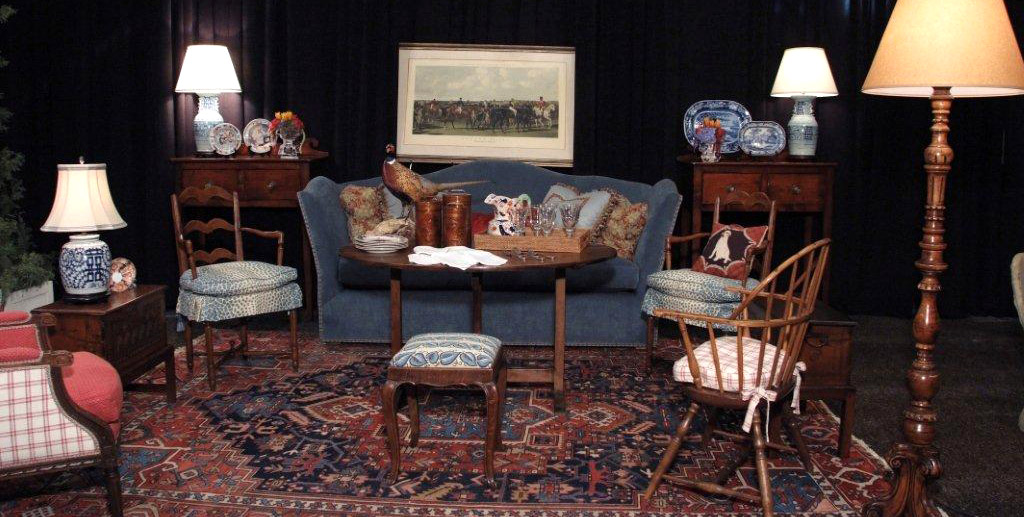 Founded in 1952 by Kappa Alpha Theta Houston Alumnae, the Theta Charity Antiques Show is considered by many aficionados to be one of the top three antiques shows in the United States for size and quality—and it’s all for the benefit of Houstonians. The show has not only provided a unique, world-class cultural experience for the city of Houston but also raised more than $6.5 million since its inception to support Houston’s nonprofits in education, the arts, health care and community assistance. Over the years, the Antiques Show has benefited 90 organizations. As one of the show’s four permanent beneficiaries, Texas Children’s Cancer Center has received annual contributions totaling $1,904,362.

The Theta Charity Antiques Show is now a five-day event run completely by volunteers. It includes four days of public exhibits and educational seminars, preceded by an underwriters’ reception and preview show. More than 70 committee chairs and 200 volunteers from within the organization and beyond contribute their time and talents each year to making the Antiques Show a success.

Having attained national prominence and with a reputation for spectacular loaned exhibits of museum quality antiques from throughout the United States, fascinating educational sessions with acclaimed experts and more than 50 leading dealers every year from around the world, the Theta Charity Antiques Show is a staggering undertaking. It takes five full days to set up and transform the huge George R. Brown Convention Center exhibit space into an elegant setting for often priceless antiques. The committees and other volunteers begin preparing for the next year immediately after the conclusion of a show, striving each year to reinvent the show with a new and exciting theme that can be carried through the décor, the speakers, even the food. Dealer Fletcher-Copenhaver has called it “… the best run antiques show in the country, with an amazingly high level of professionalism.”

The Antiques Show annually supports four permanent beneficiaries including Texas Children’s Cancer Center, Bayou Bend Collection and Gardens of the Museum of Fine Arts Houston, Child Advocates and the Kappa Alpha Theta Foundation for scholarships. The philanthropic committee receives proposals each year from other community nonprofits, from which an additional four are selected to receive funding for that year.

According to Theta leadership, their annual goal for the show this coming fall and in each of the past several years has been $200,000, and proceeds have actually exceeded that goal each year. The Thetas receive no funds from sales of antiques at the show. Funds are derived from underwriters, ticket sales, program ads and dealers’ exhibitor fees.

If the Theta Charity Antiques Show is today arguably the only show of its type in the Houston region, it was certainly one-of-a-kind when it got its start in 1952. Houston Kappa Alpha Theta alumnae created it when they decided they needed a new way to raise funds for their philanthropic endeavors. They had already tried everything from selling crocheted coat hangers, tins of metal polish and magazine subscriptions to chances on a mink stole, and they wanted to find an original yet profitable fundraiser. They heard about a New York church that intended to raise funds through an antiques show and bazaar. This idea struck a resounding chord with chapter members, and they set the wheels in motion. Soon, their enthusiasm had elicited cooperation and underwriters from throughout Houston, including time and space donated by newspapers, radio and television stations to publicize the event. The first setting for the show was the ground floor of the already legendary Shamrock Hotel. Today the Antiques Show is Kappa Alpha Theta Alumnae’s only fundraising project and has recently netted as much as $300,000 in one year for its beneficiaries, far above the organization’s fundraising goals.

It took great courage to launch something totally unique, untried and uncertain, and the Thetas continue to make the Antiques Show different and unique today. After 60 years, their enthusiasm is still astounding. Each show chair and her committees work long and hard to ensure that their show will be the best ever, offering attendees something that will enlighten, inspire and entertain them—and make them want to come back the following year.

The relationship between Texas Children’s Cancer Center and the Theta Charity Antiques Show began in 1975 when half the show’s proceeds were given to support the early work of Texas Children’s Hematology Research Service, which had been initiated and developed by Donald J. Fernbach, M.D. That service has grown into the internationally renowned Texas Children’s Cancer Center and Hematology Service, headed by David G. Poplack, M.D., and the show has supported it every year since. Dr. Fernbach says, “The Thetas have been one of the most consistent long-term donors to the Cancer Center. Their early support and generosity made it possible for us to grow this program.”

Proceeds of the 2005 show established The Donald J. Fernbach, M.D., Lecture Series, presented by The Houston Alumnae of Kappa Alpha Theta. Subsequent Theta gifts endowed this exceptional series, which brings distinguished national and international experts to present at the Cancer Center’s research conference, providing fellows and junior faculty an intense teaching experience. “It is truly fitting that the Thetas are the group that stepped forward to make this series happen,” Dr. Poplack says. “Through these exceptional lectures, Kappa Alpha Theta is giving medical researchers, their trainees and students from throughout the Texas Medical Center a unique forum for important scientific dialogue. There is no question that without the Theta support, this now nationally recognized lecture series would not have been possible.”

Over the years, the women who have chaired the Theta Charity Antiques Show have developed and demonstrated great leadership. They undertake a huge responsibility to maintain excitement among volunteers, the community, donors and even the dealers while juggling the myriad of organizational details that are part of the job. There is no paid staff, so the chairman and her committees dedicate countless hours to making sure every detail is perfectly executed. Once a Theta has chaired the show, she could “rest on her laurels,” but most chairmen continue to work on the show for many years and are valuable assets as advisors to succeeding chairmen.

The “how-to” of conducting the show was drastically sidetracked in 2005 and 2008, when two of the most devastating hurricanes ever to hit the Gulf Coast, Katrina and Ike, forced cancellation of the show in those two years. However, even these cataclysmic events did not deter the Thetas from fulfilling their commitments of support for their beneficiaries!

Katrina—the costliest hurricane in U.S. history—struck the Gulf Coast on August 29, 2005, just two weeks before the Antiques Show was scheduled to be held in the George R. Brown Convention Center. As we all know, Katrina pushed its destructive path far inland for a week and Houston became a principal destination for many thousands of coastal residents fleeing westward from the storm’s devastation. Travel in the South became nearly impossible. Theta leadership and the show chairmen realized quickly that it was not feasible to hold the show. With the Convention Center being used to house and care for storm refugees, there was no other truly satisfactory venue available. In addition, within days, dealers began to cancel participation because they simply would not be able to get to Houston with their wares.

It was not practicable to reschedule the Antiques Show to a later date, so the Thetas set about saving what they could, which turned out to be everything except the show itself. A special preview luncheon, featuring speakers Leslie and Leigh Keno, had been scheduled at Houston Country Club and went on as planned. The Museum of Fine Arts Houston graciously came to the rescue by offering its facilities for the underwriters’ reception, preview party and educational sessions, as well as the special loan exhibit. Show chair Sandy Lucas and others contacted all of the underwriters to let them know that the show itself was being cancelled and to express the hope that they would continue their support and attend the relocated special events. None of the underwriters wanted their money back, and the Thetas were able to meet their fundraising goal.

Every Theta breathed a sign of relief. They’d faced an unimaginable obstacle and prevailed; nothing so bad could happen again—until three years later when Hurricane Ike roared in on Labor Day weekend and turned off the lights and water in Houston for weeks. Once again, the George R. Brown had been transformed into a shelter and triage area for local hospitals. In a city without power, littered with debris, the show’s chair, Nancy Craig, found there was no option but to cancel the Thetas’ venerable show once again. This time, the first step was to contact the dealers, who did not yet realize the extent of Houston’s situation. Within hours, all the dealers had been reached.

With so many upfront costs, such as advertising and printing, already incurred, it remained impracticable to reschedule the show and pay those costs a second time, but the Museum of Fine Arts Houston stepped up again to offer facilities for other events that could be held at a later date. And once again, all the underwriters stayed the course and continued their support. Proceeds in 2008 exceeded the fundraising goal by more than $30,000.

As Sandy Lucas notes, after the Convention Center returned the Thetas’ deposit, the amount saved by not staging the show almost offset the amount of ticket sales and dealers fees lost to cancelling the show. Thus, the Thetas were able to fulfill their fundraising goals. But such a happy outcome would not have been possible without the enthusiasm of the show’s leadership and the diligent hard work of volunteers in pursuing every possible avenue to keep their promises to their charitable beneficiaries.

As Nancy Craig puts it, “In 2008, Ike prevented us from providing the wonderful cultural experience the show has come to represent for Houston. However, Theta’s mission of giving financial aid to nonprofit organization in our community has never waivered.

While the Theta Charity Antiques Show has proved that not even a hurricane can stop it, the Show has found that scheduling it in November has so far eliminated this possibility.  In 2015, the Show will move to the Bayou City Event Center, 9401 Knight Road.